There is an evil I have seen under the sun, the sort of error that arises from a ruler: Fools are put in many high positions, while the rich occupy the low ones. I have seen slaves on horseback,
while princes go on foot like slaves.
Whoever digs a pit may fall into it;
whoever breaks through a wall may be bitten by a snake. Whoever quarries stones may be injured by them;
whoever splits logs may be endangered by them.  If the ax is dull
and its edge unsharpened, more strength is needed, but skill will bring success. Ecclesiastes 7: 5-10

From the Bible reading above. It is very clear that humans create errors with their imaginations and these imaginations lands them into the pit or to the venomous spits of snakes. The pit did not force you to come but you dug a pit and yet fell into it. Also the snake was lying gently on its own but you went to break into its home and found that a snake spitting at you. All these things started from imagination.

Consider why wise people are lying waste in the city while the unlearned are ruling in the government. 1Cor 10:23 CEV says "Some of you say, “We can do whatever we want to!” But I tell you that not everything may be good or helpful." Fools are placed in many positions and slaves riding on horseback but the rich occupy low ones and princes go on foot like slaves.

1 Samuel 13 Amon was so in love with his half-sister Tamar , a virgin who happend to be Absalom's sister. Amon was advised by his friend called Jonadab to act like he was sick and ask the king to send his half-sister Tamar to nurse him. He raped Tamar and he lost his life to the same course. In verse 32 it was same Jonadab his friend that announced to his father about his death. You see that Amon was just a short-sighted wise man who lost his life to self conceited wisdom of getting what he wants by all means because they look good in his eyes. He believes in short term achievements and refused to recognise that he is digging pits for venomous snakes in his imagination. When he imagined the whole thing, he really wished he could have his wish come through. What a spoilt brat! His friend helped him more into early grave with wrong advise.

Your magical enemy is hidden in your imaginations and they will bring you to bad advise and decisions. Whenever these imaginations come to you, you must sight the pit and snakes immediately and use your skill to drop the dull ax with unsharpened edge. Afterall our Lord Jesus Christ said "whoever wants to become great among you must be * servant, and whoever wants to be first among you must be * slave— which means beware of the traps lying as magical enemies in your imaginations to be great. In this was you will be able to map out your way into breakthrough.

Prayer: God, please be good to me. Help me fix my mind on eternal blessings and fruitfulness in Jesus name. Amen.

Shout for joy to God, all the earth! 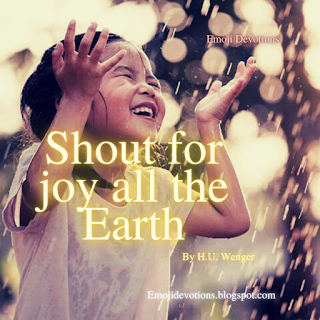